Blue Hour Photography in Singapore and Beyond

I often come across people mixing up “blue hour photography” with “night photography”, but to me, those are distinctively different.

In a timeline, SUNSET comes first, followed by TWILIGHT, DUSK, and then NIGHT arrives. The time between sunset and dusk is known as BLUE HOUR, colouring the sky deep blue, especially towards the end of dusk.

Sunset to night in timeline. Blue hour photography can be shot at twilight and dusk. To find out your local sunset and dusk time, search up your city on gaisma.com .

Once dusk ends, the sky quickly turns into black, like within 10-20 minutes. So, any photos taken after the end of dusk should only be called “night photography”, as there is no bluish hue left in the sky.

You could argue that blue hour is a part of night photography, but I beg to differ, because the difference is obvious to anyone’s eyes, as seen in the photos below. I definitely don’t want my blue hour photos to be labeled as night photography.

I’m a firm believer that blue hour is the best time to shoot cityscapes, but exactly when should we shoot blue hour photos in order to get the best possible results?

Although it’s called “hour”, blue hour doesn’t last an hour. In Singapore, blue hour (the time between sunset and dusk) only lasts 20+ minutes, but this depends on where you are located relative to the equator (and on seasons). A basic rule of thumb is that the farther away you go from the equator, the longer blue hour becomes. 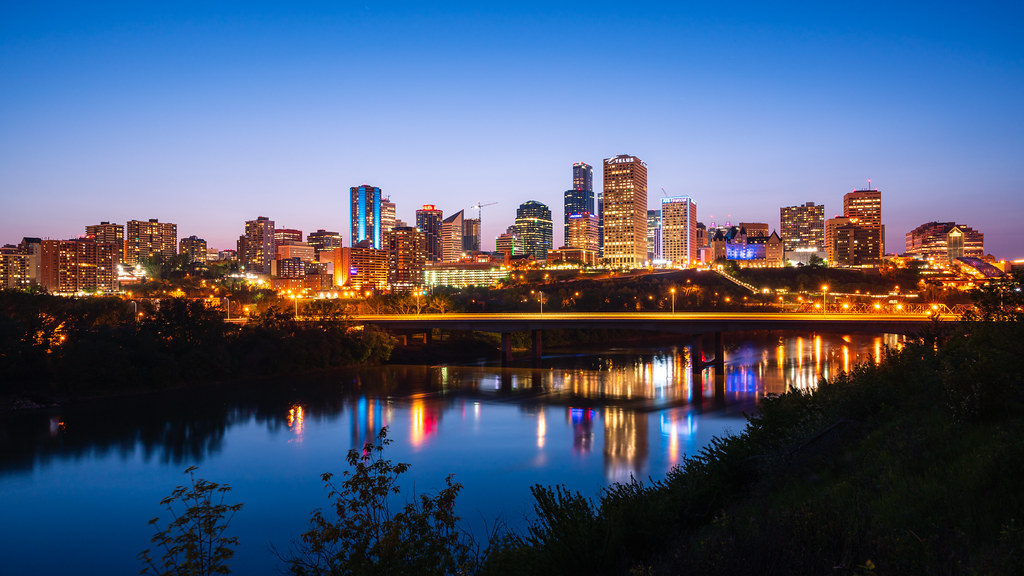 Edmonton (Canada). Blue hour lasts 50+ minutes in Edmonton’s summer and dusk ends around 11 pm. I have no idea how it’s like to have such a long blue hour. Probably the transition between sunset and dusk goes a lot slower? © Dave Wong on Flickr

Normally, the first half of blue hour is still too early to shoot, as the sky hasn’t yet taken on a deep blue hue that is typically seen towards the end of dusk.

When there is about 10 minutes left before the end of dusk, the bluish hue starts to appear in the sky and gets deeper with every single minute passing by. It’s these last 10 minutes of dusk that are undoubtedly the best time to shoot blue hour photography.

Shooting “Rather Early than Late”

One thing to note is that if you shoot too close to the end of dusk, your photo will likely come out too dark and it’s hard to rescue even in post-production.

So, I take an approach of shooting “rather early than late”. Indeed, those photos shot prior to the peak of blue hour are less vibrant but have a cleaner look that I’ve come to prefer these days, just like the photo below (shot 24 minutes before the end of dusk). Also, it’s easier to enhance such clean and light photos in post-production by adding vibrancy and saturation as needed.

By the way, I see nothing wrong with shooting at night, but personally, I rarely shoot after dusk. To me, night photography isn’t as pretty, because the sky looks muddy once those beautiful deep blue hues are gone.

By now, it should be clear that blue hour photography and night photography are distinctively different. One amusing fact I’ve noticed is that many non-photographers (even English-educated people) don’t know the word “blue hour”, so I’ve had to explain a number of times.